So, me & the missus went over to Exxxotica last week to set up the Landspeeder for Vivid at their booth before the annual smut fest that is Exxotica began. It was a sad day for us as it was the last day we would see the speeder in it’s full glory, rumour has it that she will be sold at a fan auction & seeing as this baby took us 3 weeks to build from scratch… we decided to take it for a last spin!

Anyway, this was then followed by me, as Darth Vader, making a personal appearance with Allie Haze (Leia) & Aiden Ashley (Sexy stormtrooper)… which was to be fair, alot of fun despite sweating my bollocks off for 4 hours & posing for a million photos!

As a side note, i must thank Allie & Aiden who looked after me (as i am nearly blind & deaf in the costume) for most of the day & keeping me fed/watered & preventing me from passing out… thanks girls! 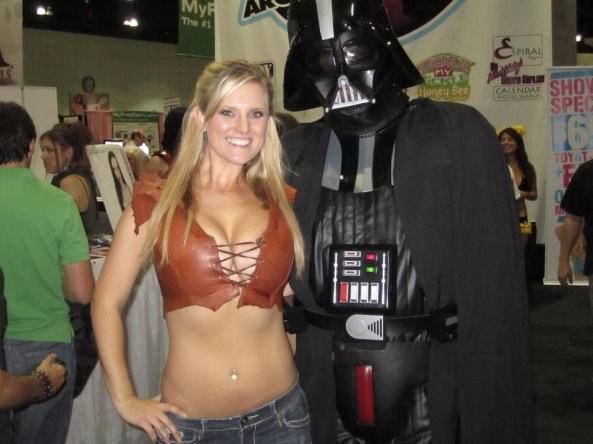 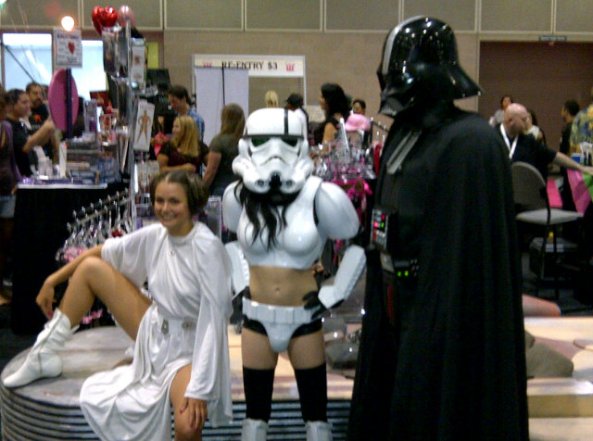 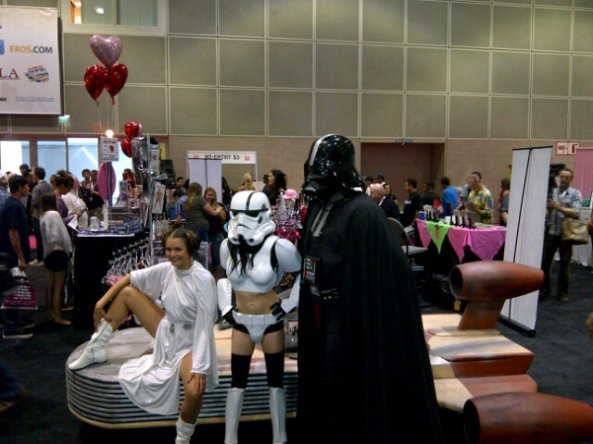 What a great night, me & Kylie (aka DeeKay) did our first joint street art gallery showing at the Sunset Marquis in West Hollywood tonight, along with some of the best graffiti artists/street artists & photographers on the planet today…

Anyway, here are some pics of the show & some of the art we did, remember the show runs until September 7th, so if you are in town you should definatley check it out… 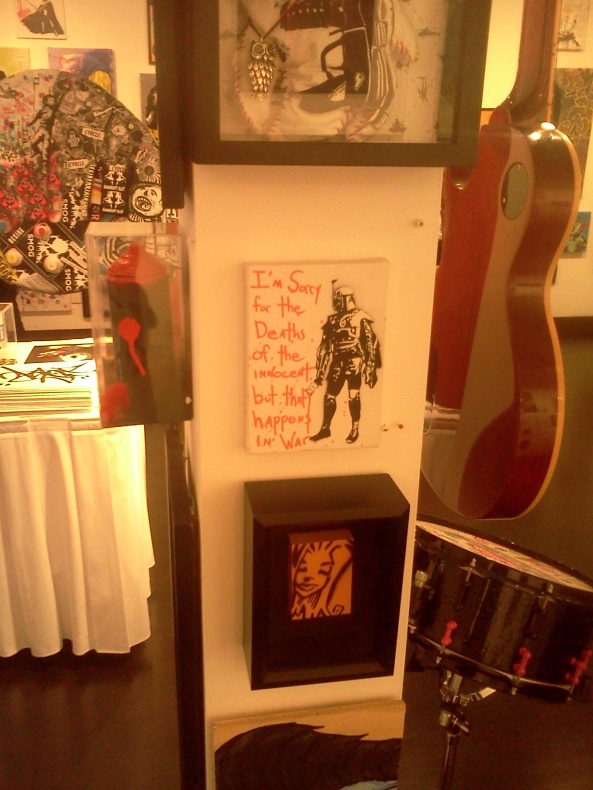 It’s been SOOO long since I have written this part of the blog that I had to read the last few parts of the story & then sit down with Kylie to try & work out what happened next… I mean, I KNOW what happened next but it’s how to write it all down in the correct order so that it makes sense, I cannot make any promises… but this is roughly it.

(As previously mentioned) I arrived back in the UK, got the train to my buddy Mick’s house & then got completley slaughtered as I regaled stories of our time in London, it was GREAT to talk about it but also very sad, I missed Kylie SOOO much & I still had some really insecure moments of doubt about our future (Hind sight is a wonderful thing, I knew nothing would go wrong but hey… I’m Human & insecurity is a BITCH!!)

Eventually (after 14 hours, give or take) Kylie landed in Los Angeles & my phone lit up… JOY, she still loves me, it was just a quick message saying she had landed/flight details etc… that she missed me and after she had slept and caught up with a few things we would Skype and the process of me going to see her would commence. Things WERE real …real scary, I had to go home at some point and tell the family what i had ACTUALLY been doing in London and that the most attractive and popular member of the family (gimme a break, I am writing this from my point of view) would soon be leaving to start a new life in Los Angeles.

SO more time past and then some more… and so I drank some more, infact I spent 2 days at Micks… 2 days drinking, enjoying time with friends and basically waiting around for time to Skype. And then Skype came, Kylie was sat in bed, recovering from Jet Lag with my hat on… she looked beautiful, she always looks beautiful, how on earth anyone looks that beautiful after a 14 hour flight and then 6 hours sleep is beyond me but hey… I’m not complaining, Kylie is the most stunning woman I’ve ever seen, so GO team Andy, don’t hate me… just know that I am lucky (and thankful for it!)

As I have often said in this story, Skyping is great but also very hard, I SOO wanted to reach through the screen and grab her, I could smell her on me when we talked, even though we were so far away, it kept my sanity intact knowing that I could see her whenever I needed her…

Anyway, after a few hours of chatting she had to start her day, remember the time difference, she was 8 hours behind me so when she was getting up, my day was drawing to a close & I had stuff to do, I had stuff to sell… I had a car I wasn’t gonna need & belongings to gather & organise… I had to go home.

After eating (and drinking) Mick out of house & home for 2 days, he very graciously took me to see my Dad.

Sidenote: I had recently moved out of a very nice apartment that was FAR too expensive (and complicated) to live in a few months previous to meeting Kylie & therefore was staying with my Dad.

OK, so let’s talk about my Dad for a second for he really is one of a kind. He is 71 years old, self made, a widow, father of two ungrateful & rather selfish children, a cornerstone for his family & friends & without doubt one of the most emotionally strong & worldy wize people I have ever known… we are SOOOO alike in SOOOO many ways and yet we differ SOOO much, if i had a Dollar for every scrape he pulled me out of, or for every time I needed his advice or strength of Character I would be a rich man. We are close without actually being close, I have built, destroyed, changed direction & rebuilt my life so many times I am suprised that he hasn’t disowned me a million times and yet he is always been there, he has never once questioned me or judged me, he has always supported every decision, encouraged me and I have always known that I can come knocking on his door without needing forgiveness for some of the ridiculous thing I have done with my life… but I am about to tell him I am leaving forever… to move to Los Angeles… to be with (what he might only see as) a porn star… this one might test his patience!

I arrived home with the typical Dad greeting “Oh, I wondered where you were’ & ‘What trouble have you found this time?’ …so I told him! He didn’t bat an eyelid, he didn’t seem suprised, he actually seemed quite excited (although maybe the prospect of me being on the other side of the planet was a bit of a bonus!) but eitherway, we talked about what I had done, I told him about how much i was in love and he seemed genuinely pleased that I finally might have found my place in the world and someone to share it with. It was a little surreal, it was little wierd… it was typical Dad, always encouraging, non judgemental & a few jokey insults thrown in about what my life was like and how I should live it, the fact that I was moving to the states didn’t seem to surprize him at all, infact he thought it was where I should be as he never thought i fitted in in England and was always puzzled as to why I stayed in a systen that encouraged such formality & accepted ‘towing the line’ as life options, it was a great conversation. My Dad is simply awesome & along with my sister he is the only person I truly miss.

That being said (and trying to move the story on from the Mushy stuff) the day was Sunday, Kylie had landed 2 days previously and we needed to Skype as she had emailed me various houses & apartments she had found PLUS we needed to arrange dates for my arrival as we both had LOADS of info on flights etc.

And that’s it for part 18, in the next part I will tell you about house hunting via Skype, when we booked the tickets & my eventual arrival in the states (and how the time scales changed!)

As ever, thanks for reading…

Seeing as we had a couple of days off last week, we decided to fill it with art. And as Kylie went on a wheatpaste & spray paint rampage ( see streetdeekay.com ) I went on a doodling frenzy & came up with this guy, who went onto become a stencil and inturn became various canvases… including one I did for Derrick Pierece & the Ruff Ryders.